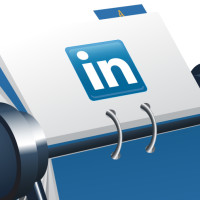 While the Rolodex may be a thing of the past, its functional successor lives on in social networking sites such as LinkedIn.  It’s no surprise then that companies encourage their employees to create profiles, share content, and “connect” with current and potential customers.

But what happens when an employee leaves the organization to hang up his or her own competing shingle?

In the days of the Rolodex, the answer was clear: the Rolodex was confidential company property and attempts to improperly take and/or misuse its contents could be subject to swift legal action.

The answer in the era of LinkedIn, however, is far less clear.  These profiles often blur the line between personal and professional, and in any event, speak to an individual, not a company’s, online personal identity.

This uncertainty may be why Canadian courts have yet to address the question of the “LinkedIn injunction”, i.e. whether an employer may have a legitimate proprietary interest in an employee’s LinkedIn profile such that its loss or misuse may give rise to “irreparable harm not compensable by damages”.

In Whitmar Publications Limited v. Gamage and Others, the English High Court recently addressed the question of the “LinkedIn injunction”.  The decision is especially notable given that Canada’s legal test for an injunction – the American Cyanamid test – originated from English law.

Whitmar, a publishing company, sought and obtained a restraining injunction against three former employees who had set up a competing company while allegedly still in Whitmar’s employ.  As part of their scheme to unfairly compete, Whitmar alleged that the three former employees amassed contact information from members of LinkedIn groups maintained by Whitmar.

The Court did not hesitate to find that the LinkedIn groups in question constituted legitimate company property, stating that:

The contact information gleaned from members of these groups was also accepted as being how the former employees were able to send out the press release announcing their new company.

How to Strengthen Employer Ties to an Employee’s LinkedIn Account

Given that the path to injunctive relief is paved with proving proprietary interest, employers should make sure the following forms part of any policy or procedure regarding LinkedIn:

Above all, employers should clarify in employment contracts and social media policies that an employee’s LinkedIn presence is a database of proprietary trade information built on the employer’s behalf during working hours, for which compensation is given.

Because really, other than a grown-up version of Facebook, what else is LinkedIn?