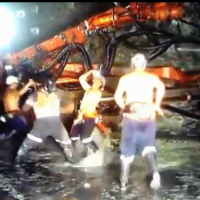 Newspapers are reporting that up to 15 non-union Australian gold miners have been fired for their alleged roles in an underground “Harlem Shake” video performance (which may be viewed on YouTube).

An estimated 4000 Harlem Shake videos are posted to the Internet daily, featuring people from all walks of life. They typically last 30 seconds and play part of the Baauer song “Harlem Shake” in the background. During the first half of the video a lone person dances to the song surrounded by others who are oblivious to what is going on. In the second half of the video everyone gets in on the fun, convulsing and contorting to the music. In many of these videos the second half involves a costume change, with participants who were previously wearing uniforms, work clothes or whatever donning a wackier wardrobe (or less clothing altogether).

In the case of the Australian miners, it is reported that the employer saw in the performance, among other things, a breach of safety rules.

It is true that some of the workers are not wearing Personal Protective Equipment (PPE) in the video. One is waving about what appears to be a long metal rod (could it hit someone?). Some of the convulsive dancing makes my lumbar spine sore from just watching it. And there is an obvious slip and fall hazard in play, with the miners dancing about in mucky puddles.

I must admit that my first (non-lawyerly) reaction to the video was: what is the big deal? They are just having a little fun. But as my mom would say, it is always fun until someone loses an eye. And as a safety lawyer who has seen some of the most unlikely accidents come across his desk, although this video does not appear to reveal potential for a critical injury or fatality, there could be a strain or a contusion in the making. If that happened, do you think that the injured worker would not seek workers’ compensation benefits? Unlikely that he would not in my view.

If this happened in Ontario, the legislature, Ministry of Labour (MOL) and Workplace Safety and Insurance Board (WSIB) would likely not see this as fun and games either.

Under the Occupational Health and Safety Act, miners have to wear PPE while in the workplace. Further they are prohibited from engaging in “any prank, contest, feat of strength, unnecessary running or rough and boisterous conduct” (s. 28(2)(c)). Noting the broad and liberal interpretation that must be given to this law, I am pretty sure that we could find “Harlem Shake performance” somewhere in those words.

Moreover, workers can deprive themselves of entitlement to accident benefits under the Workplace Safety and Insurance Act, 1997 when they are injured while “participating in horseplay and larking” (see WSIB Policy No. 15-03-11). If you understand “larking” to mean “to engage in spirited fun or merry pranks” then you can see the legal problem with “Harlem Shake performances” in the workplace.

Perhaps an employer sanctioned “Harlem Shake performance” in accordance with a properly drafted safety policy, after proper safety training, and wearing required PPE would be okay (and compensable if there were an accident).

Beyond that however, a question I have in my mind is : Was the video prepared during working hours on the employer’s dime?

Even if it was, the way things are anymore I am hard pressed to see how what happened in this case would be just cause for dismissal, although it would likely be worthy of some sort of discipline.